Super Resolution is in LR now (ACR since March)

Super resolution has been in ACR in Photoshop for many months (since March) now, but it is finally directly in LR

Have you tried the Abobe ACR Super Resolution yet? It is awesome! It increases the pixel count 400%. Enhance allows you to increase image quality for making large prints or increasing the resolution of a cropped image. It is coming to Lightroom "soon" (soon is Adobe's timeframe, stated in March), but for now, right click, edit in, open smart object in Photoshop which will open the file in ACR).

Bottom line: Work well and it is Better, Faster, and Easier (workflow wise) than Topaz Gigapixel.
Why/When use Abobe ACR Super Resolution?
-- for older cameras with less megapixels
-- to crop an image to get bigger birds/subjects
"Super Resolution, introduced in Camera Raw 13.2, helps create an enhanced image with similar results as Raw Details but with 2x the linear resolution. This means that the enhanced image will have 2x the width and 2x the height of the original image, or 4x the total pixel count. This feature supports the same file types as Raw Details, plus additional file types such as JPEG and TIFF. Super Resolution is especially useful to increase the resolution of a cropped image." https://helpx.adobe.com/camera-raw/using/enhance.html
Tip -- If you want to go make your image 4x the size of your original size, open the file in ACR, save the dng (2x) and then re-open it in Adobe Camera Raw and run the enhance feature again on this saved copy (you can’t just run it again in Camera Raw without opening it and saving it again).

I compared Abobe ACR Super Resolution to Topaz Gigapixel, which I have used in the past and it works, but it is clunky and slow. Workflow wise Topaz Gigapixel does not interpret RAW files well, so I have to open the file in ACR and save it as a TIFF and then open it in Topaz Gigapixel, takes a while to process. See our comparisons below.

• In the Develop module, choose Photo > Enhance or, right-click in the image (Control -click on Mac) and choose Enhance to display the Enhance Preview dialog. 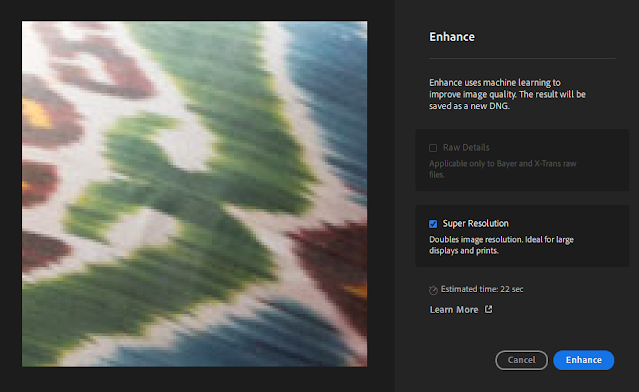 • Any adjustments made to the source photo will automatically be carried over to the newly created, enhanced DNG.

To learn more about how Super Resolution works, check out this post by Eric Chan https://blog.adobe.com/en/publish/2021/03/10/from-the-acr-team-super-resolution.html#gs.4grl9h

Posted by Lisa and Tom Cuchara at 8:17 AM No comments:

DPreview Interview: Olympus Educators Lisa and Tom Cuchara on how Olympus has transformed their outdoor photography

Check this out! DP review interviewed Tom and I, publishing a story and several of our images.

"In this interview, they explain their background, the various kinds of photography that keep them creatively inspired, and why they chose to make the switch to Olympus's Micro Four Thirds system for their bird and nature work." 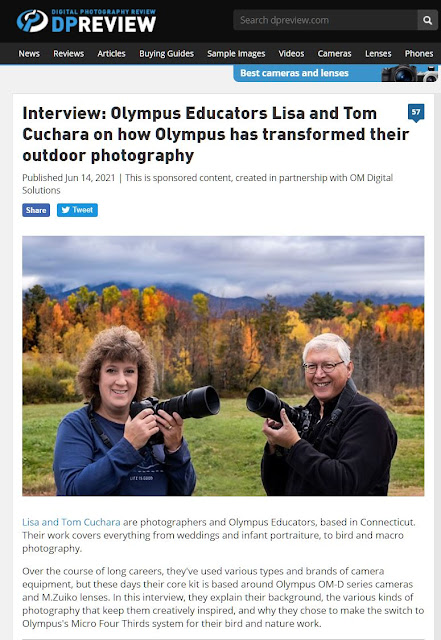 Posted by Lisa and Tom Cuchara at 8:44 AM No comments: